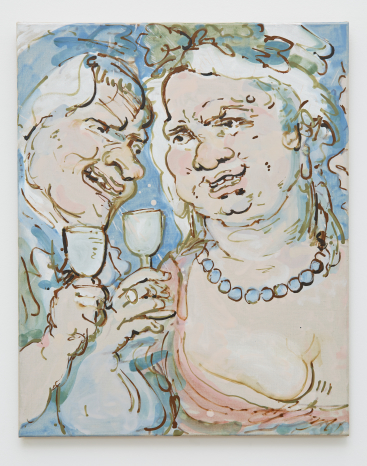 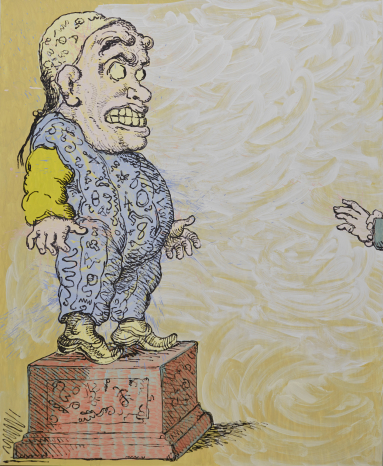 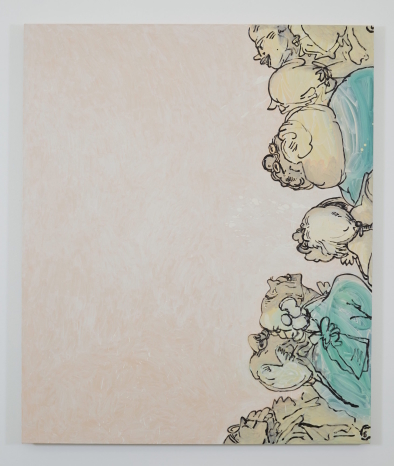 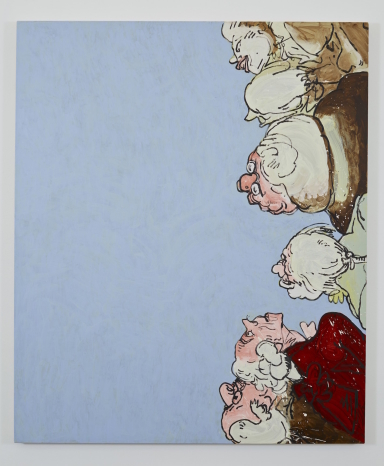 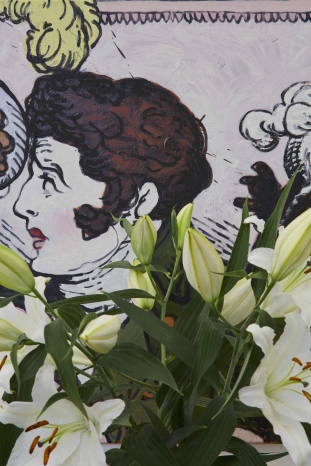 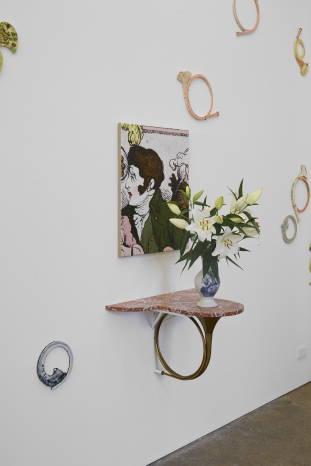 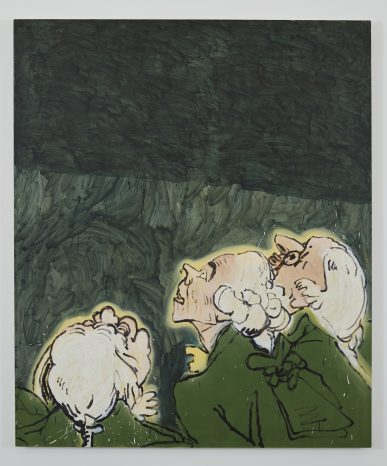 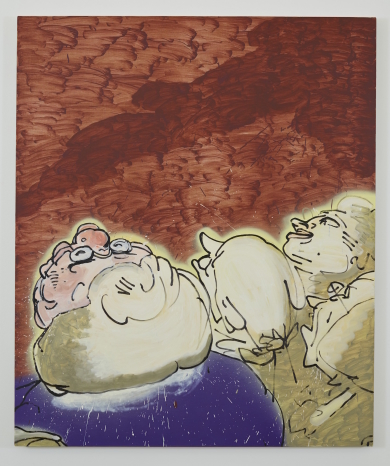 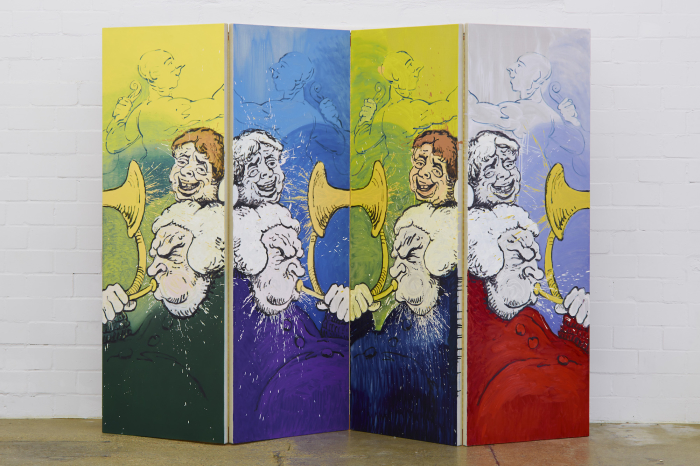 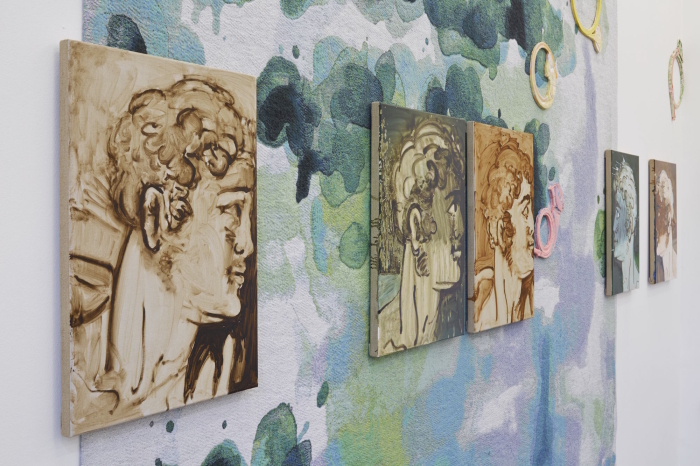 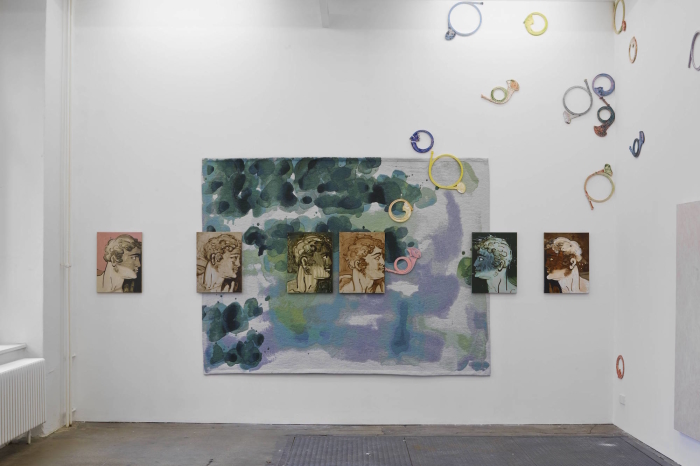 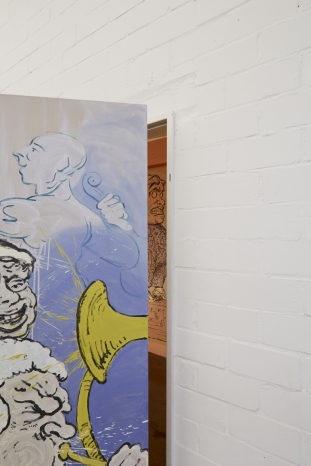 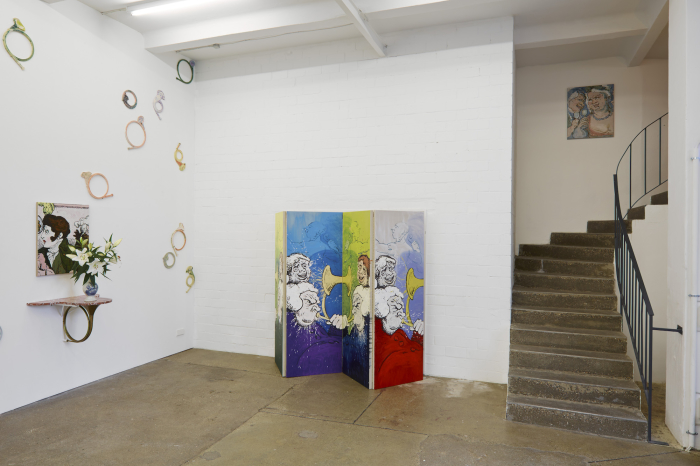 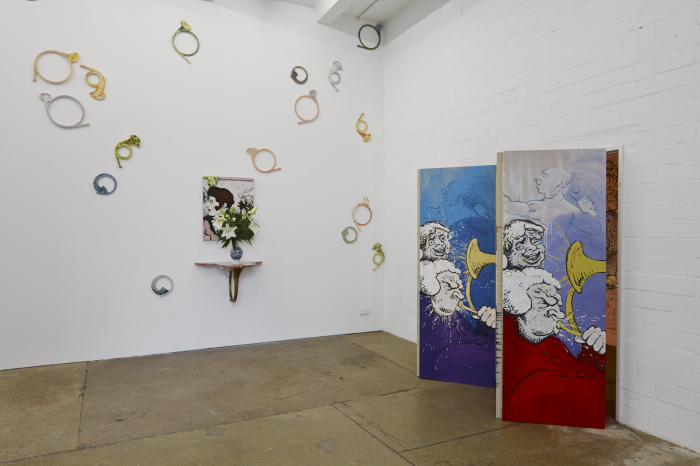 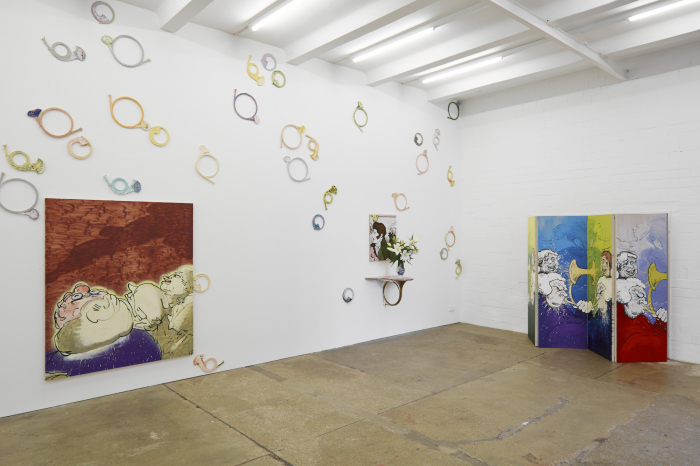 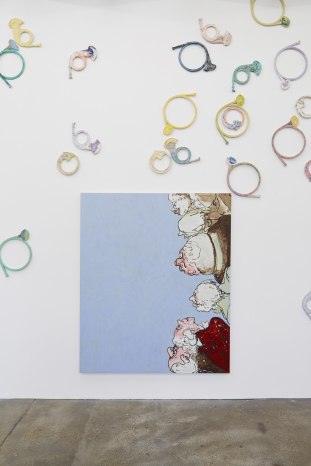 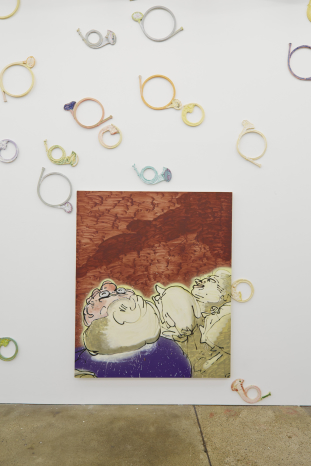 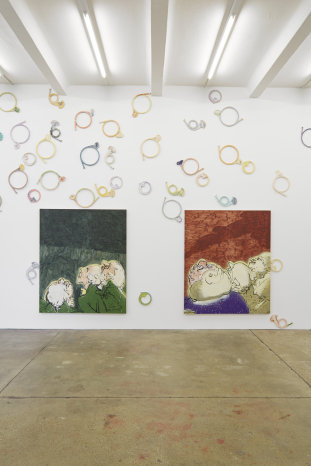 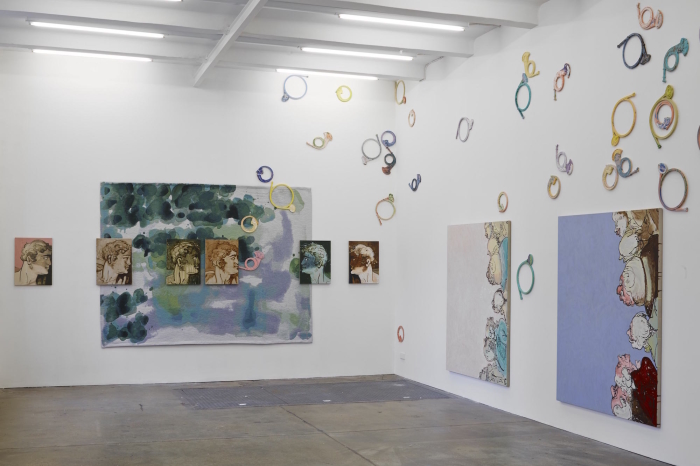 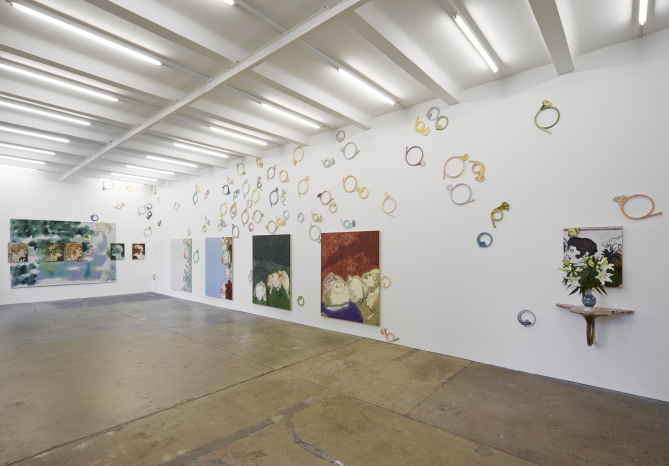 In his first solo exhibition at Supportico Lopez, Schaulust, Charlie Billingham presents a new body of work encompassing painting, tapestry and sculpture. The works stage a self-reflexive enquiry into ways of looking, subversively re- evaluating the traditional ‘male gaze’ of art history. Taking as its title Freud’s German term for the ‘pleasure in looking’ (translated in English as ‘scopophilia’), the exhibition probes the erotic implications of spectatorship – the desire residing in a glance, or the fine line between a casual gaze and a sexual fantasy.
Four large scale paintings show clustered groups of men peering avidly in the same direction, collectively forming a sequence of ‘looks’ in which the gazed-upon object is endlessly displaced or deferred. Derived from cartoons by the English caricaturist Thomas Rowlandson (1756-1827), the figures lurk on the perimeter of each picture, seen from above or elliptically. Across the remaining expanse of the canvas, a field of opaque or churning colour describes the vacant space into which they stare. Florid caricature is offset, in this way, by a painterly monochrome ‘blank’ which evokes the charged, steamy gulf between spectator and spectacle.

Here and throughout the exhibition, Billingham captures something of the feverish yet whimsical mood of the eighteenth or nineteenth-century theatre, a panopticon of admiring or derisive looks. “They’re very immersed in themselves”, he has explained of the looking men. “It makes me think of people going to the opera and the voyeurism of it all. People go to see the opera, but also to see other people.” The viewer of his huddled grotesques is thrust into the role of Wilde’s Dorian Gray when he glances down from a theatre box at the “common rough people, with their coarse faces and brutal gestures” filling the pit. At the same time, these works capture the simultaneous acuteness and obliviousness of ‘the gaze’: as the men look on, they remain ignorant of their own exposure to scrutiny or ridicule, as absurd as the man depicted in Renoir’s La Loge(1874) who gazes up blithely from his theatre box through binoculars, ignoring his female companion.

Billingham has arranged six smaller paintings across the end wall of the gallery, some of them superimposed on a large woven tapestry. Based on an impressionistic watercolour painting, this expansive drape complicates the relationship between painting and backdrop, canvas and wall – subsuming all into a multi-layered formalist arrangement. The paintings each depict a man in profile – four looking rightwards and two leftwards, in a kind of uneven mirror image. The figure is again based on a Rowlandson drawing, but has been cropped and reworked so as to resemble a coin portrait or cameo, calling to mind the plump profile of the emperor Nero. Scattered across the watery forms of the tapestry, the multiplied visages channel the stateliness of the traditional ‘portrait in profile’, but also its absurdity. Here, by contrast with the four larger pictures, there is self-conscious vanity in the ranked faces: the man enjoys being watched as he watches.

In an additional act of layering, a sequence of eighty-six jesmonite casts – crushed post horns painted in different hues – has been scattered across the walls of the gallery to create a diffuse and quixotic ‘relief sculpture’ resembling an explosion of apostrophes or musical notations. These flattened simulacra, soundless and toylike, emanate in an ejaculatory profusion from a horn touching the lips of one of the figures in profile: male vanity has seemingly given birth to the near-abstract swarm of cyphers, in the style of a child blowing bubbles into the air. Dismantling the distinction between painting and sculpture, this fantastical outpouring also hints at the blurred lines between self-love and creativity, thought and sensation, or aesthetic regard and unbridled eroticism.

In one corner of the gallery, a single installation embodies these different ideas and sentiments within the lineaments of a piece of neoclassical furniture. A marble-topped console, topped by a vase of lilies, stands beneath another portrait of an anonymous man in regal profile. However, the sensual and corporeal undercurrent of the spectacle of polite portraiture is manifested in the fleshy coloration of the marble, its bulbous phallic outline, the suggestive bloom of white petals, and the symbolic presence of a brass horn which props the structure up as a sly surrealist interpolation. Close by, a more raucous image of male posturing is found in a folding screen, again quoting the aesthetics of recherché décor in order to lampoon the pomposity that so often accompanies mannered ‘performances’ – be they musical, theatrical, or the everyday niceties of social interaction. In an inaccessible chamber behind this screen, another painting is glimpsable – an allegory of the artwork horrified by its own vulnerability to the rapacious gaze of the viewer or collector.

In Schaulust, there appears to be no female presence other than in the voracious or self-regarding gaze of the male; and yet, in the fashion of a footnote or addendum, Billingham has installed a single canvas at a remove from the main display, up a flight of stairs. In this, two women appear with wine glasses, giving a distant knowing look – a ribald laugh at the main display. In a show that abounds with gentle, nuanced mockery of the looks and poses that men strike, it acts as a final self-subverting twist.