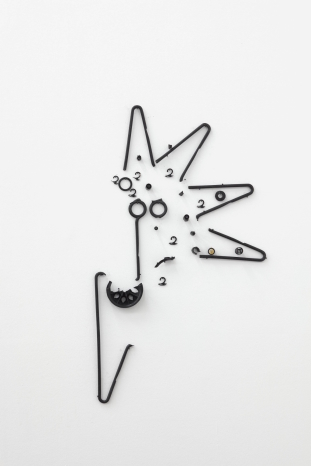 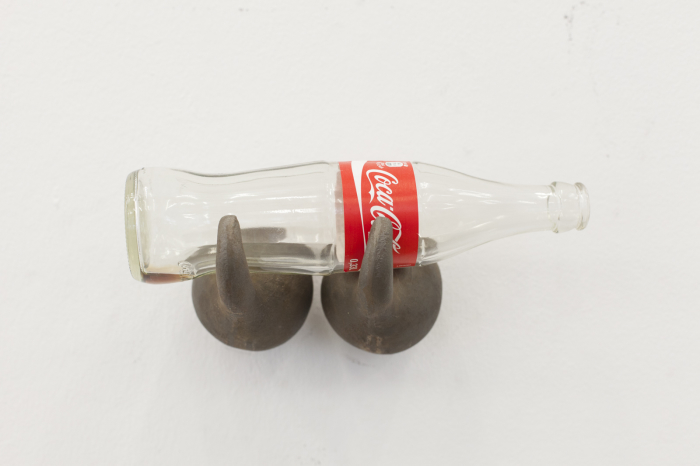 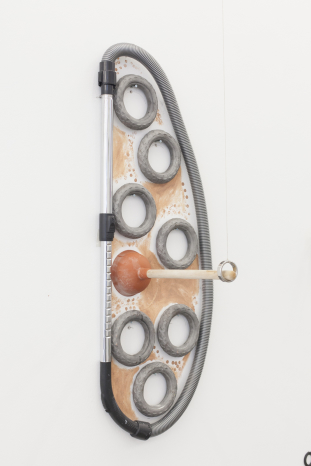 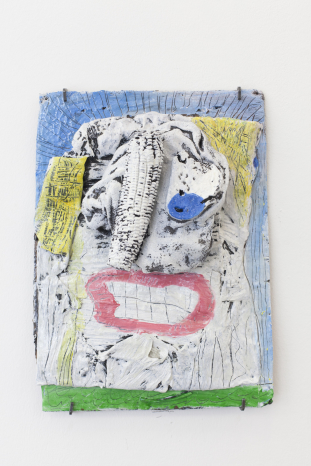 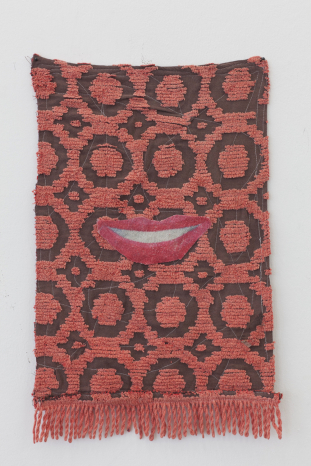 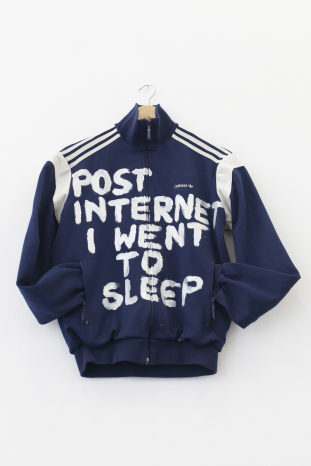 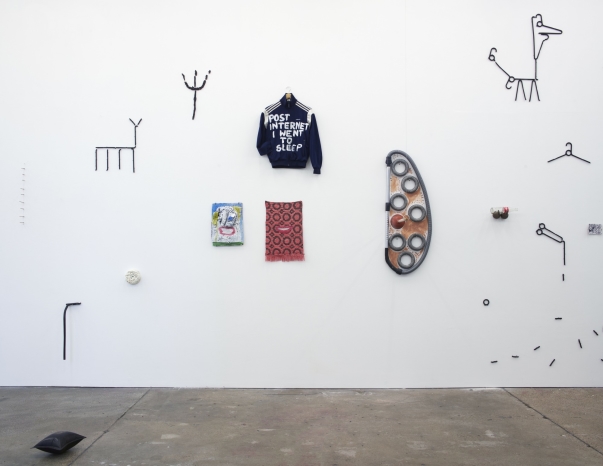 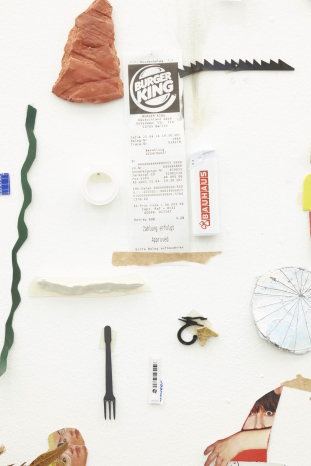 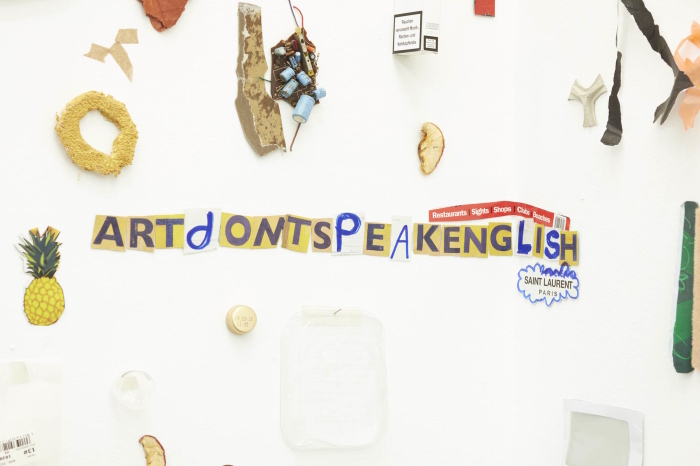 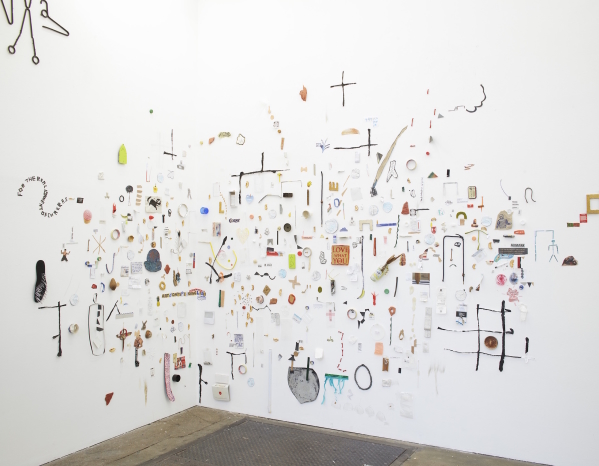 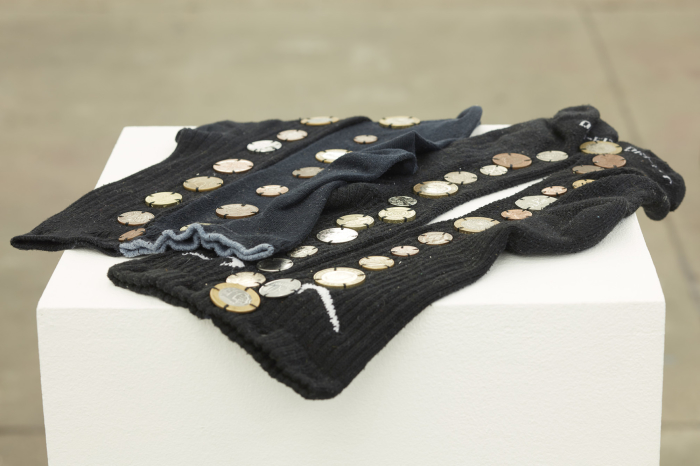 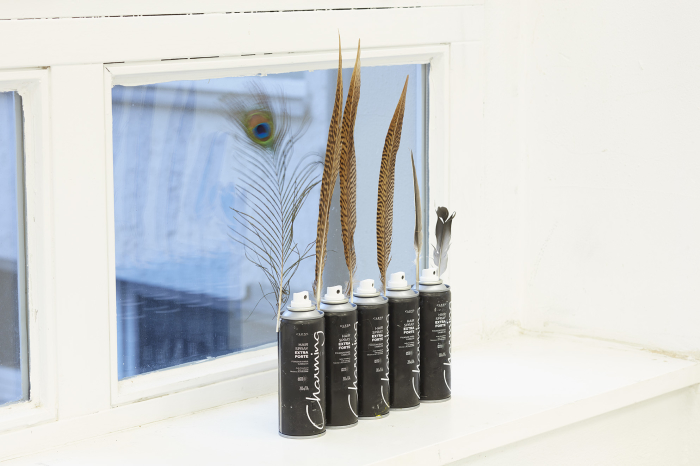 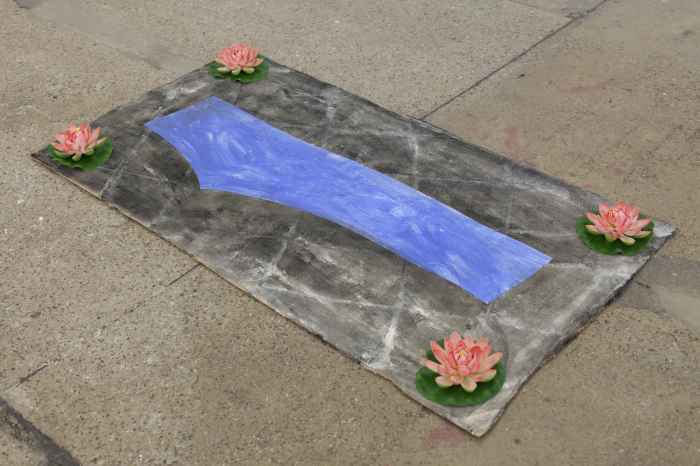 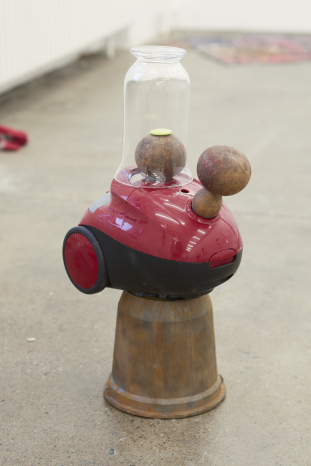 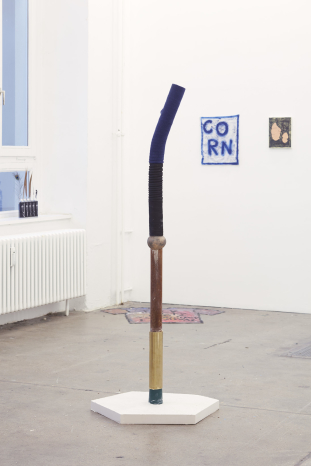 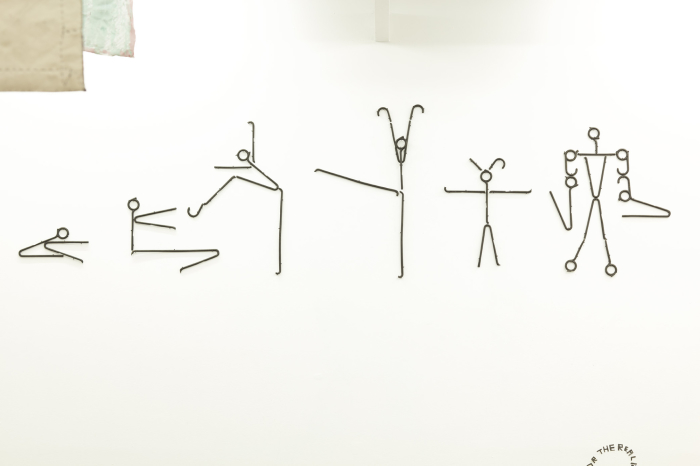 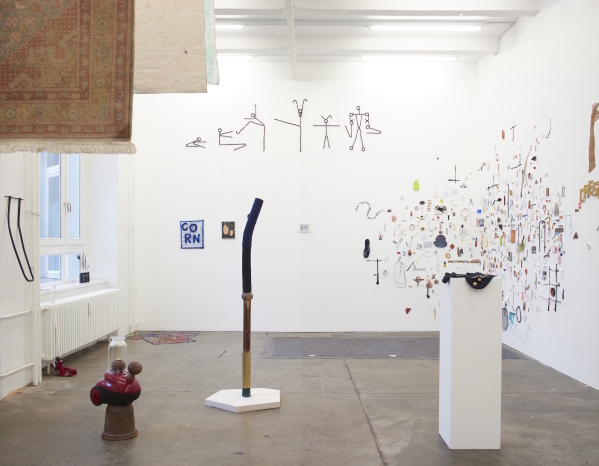 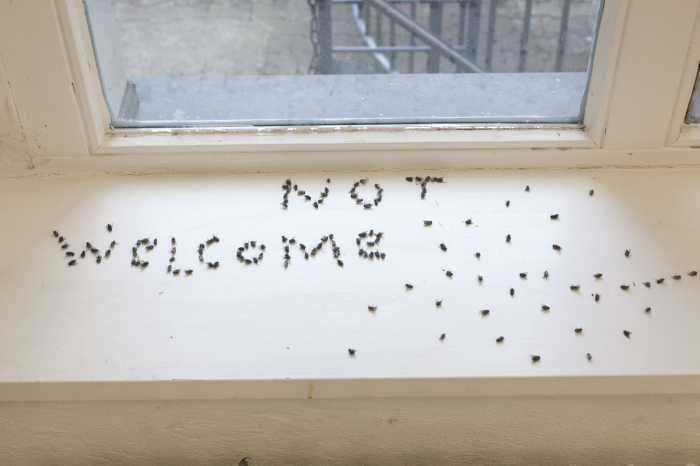 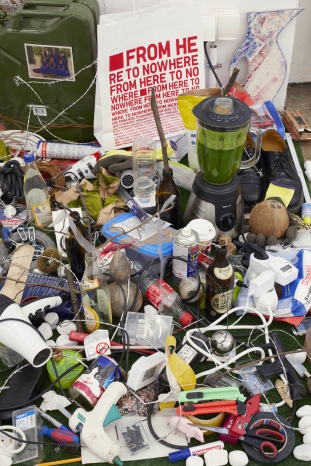 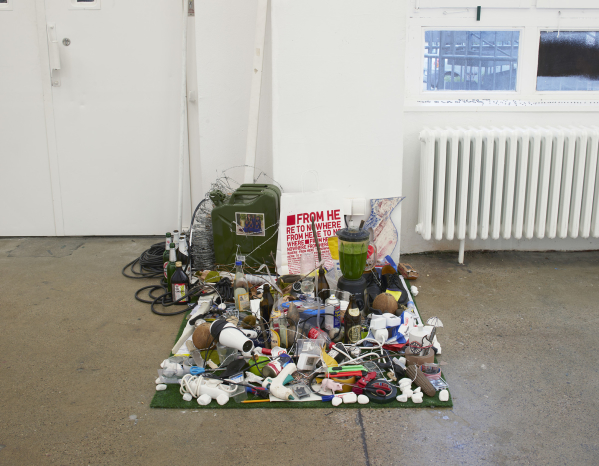 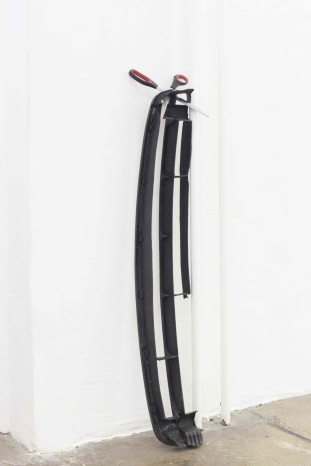 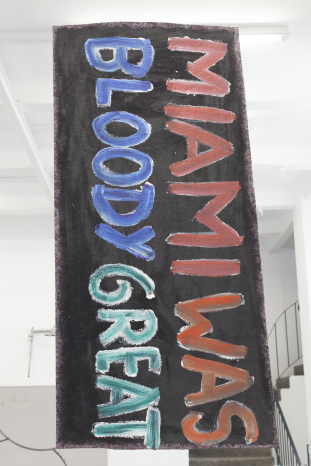 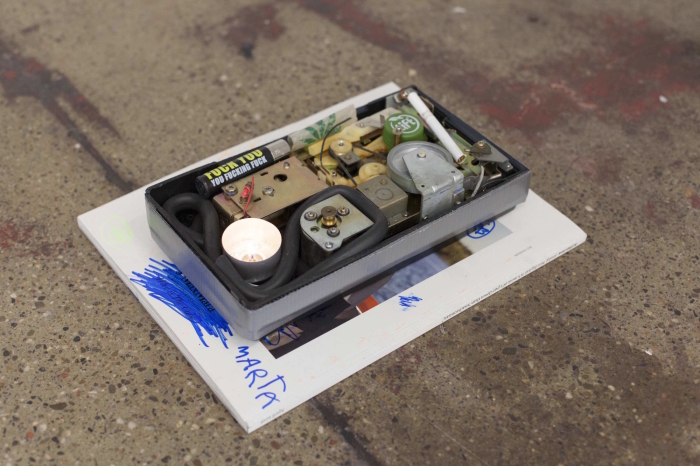 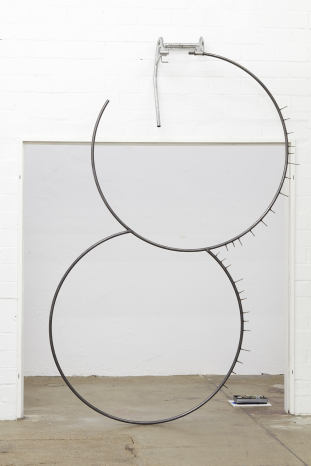 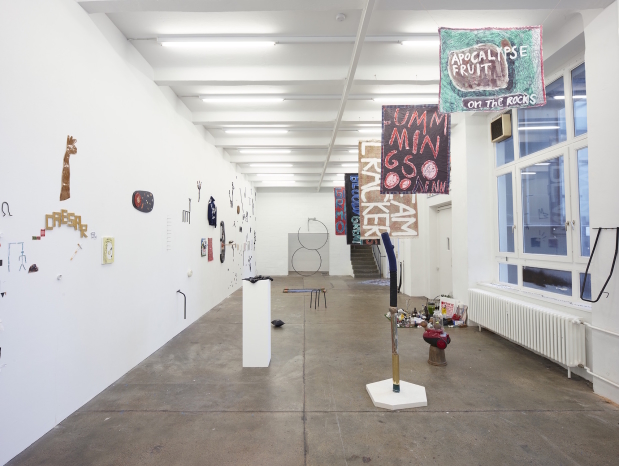 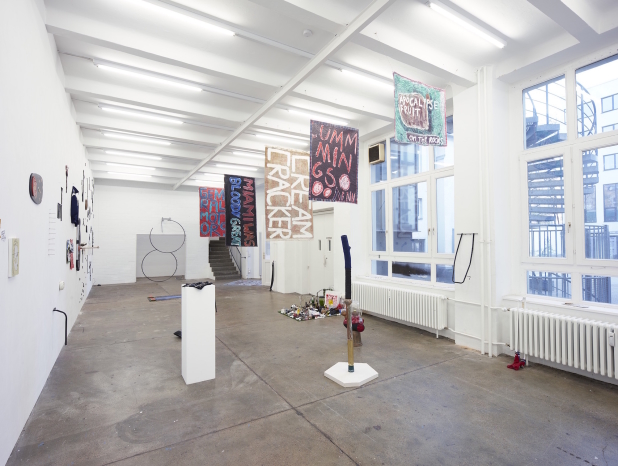 For his first solo exhibition in Germany, Brazilian artist Adriano Costa brings together sculpture, painting and video, ultimately aiming to use these as a way of drawing in space, delineating rhythmic lines, marks and words. Living in Berlin for a period of time prior to this exhibition, many of the show’s materials derive from the everyday objects encountered by the artist – toilet paper, food and clothing, to name but a few.

The exhibition’s title comprises two conjoined words and describes a world that has preoccupied Costa throughout his practice – a politicised one concerned with materialism and the Capitalist hierarchy that assesses value and worth, of both people and objects. The pejorative Brazilian phrase caipira refers to people or places on the fringes of society, those who exist outside of the usual norm: you don’t belong in my club. With the word storytelling, Costa refers to advertising and marketing practices that often seek to manipulate and influence consumers. When combined here, the artist is describing his own condition and looks to weave stories about living far away from the centre, politically and financially speaking. The artworks are cues or clues from which the viewer can piece together stories: creating certain narratives while destroying others, each person coming away with a different tale.

In theBalletDancers (all 2016), a frieze of calligraphic markings forms a sequence of images across the gallery wall. While ostensibly abstract, some motifs are reminiscent of caricatured animals or humans: a dog barking, a man bending over, someone enacting the various stages of an exercise regime. Cast in bronze from broken plastic coat hangers, these parts could be endlessly reconfigured to create new images and stories. Similary, Facezzz/Nose (2016) sees the base of a stool cast to anthropomorphic effect. Bronze, a material that is associated with high monetary value, longevity and art-historical tradition and prestige, seems incompatible with these disposable domestic objects and the light-hearted images that they depict. Costa comments on the transformative sphere of the art market and the potential for ‘zero value’ objects to travel through a passage that shifts their desirability, appeal and value.

The large-scale expanded drawing WankingAround/SingleLittleEpic (2016) comprises a mass of matter found by the artist during his stay in Berlin, including the poorest and most mundane – juice bottles, masking tape roles and cigarettes. Undermining concepts of order in the art-historical tradition, a chaotic and sprawling pattern of undulating curves and tendrils comprises images of succulent strawberry ice creams that flow into crucifixes and hangman sketches, as well as phrases including corny, Caesar and love what you do. As a portrait that uses material objects to depict a multifaceted consumerist world, Costa references the art market, politics and sex.

Concerned with what he deems ‘new conservative tendencies all over the world’, the artist is interested in lingering traces of colonialism and economic models that are defined through exploitation – a minority prospering at the expense of the masses. The work thePeople/Words (2016) comprises over 300 flies that have lived and died in a box, with a lifecycle of just one week. Used to write a confrontational message, the current refugee crisis in Europe and the value that is placed on human life are called to mind, a highly uncomfortable sense of hostility and disposability being inescapable.

Brazil’s own history sees a gulf between the rich and poor and a recent legacy of consumerist exploitation. In PopTitsToTheHitzzz (2016), pert breast-like seeds from a tree native to Brazil have been cast in steel, upon which an empty glass Coca-Cola bottle tentatively rests – a bawdy and humorous image of the thirst for sex and consumption, and the way in which sex is used as a tool to enable consumerism. The TapestrySeries (2016) hang as flags through the gallery, brandishing nonsensical words or strange sayings that appear as advertising slogans. From this, the viewer can create their own narratives, stories and poems, or recall moments in recent history that were defined by a sense of narrative surrealism, almost too unbelievable to be true (the recent violent attack at Miami Beach Art Basel 2015 being one; the line between fact and fiction, reality and performance blurred within the aura of the art market).

Combining humour and a playful approach to materials with a political thrust, economic models and ideological systems are ultimately questioned; this undermines traditional constructions of value and assumptions of taste.