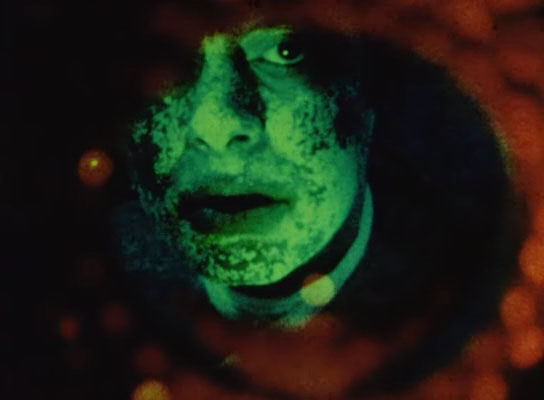 Carmelo Pompilio Realino Bene was born among the saints of the southern-most point of the South of Italy in 1937.

His birth was registered on 3 September 1937 by his father Umberto Bene, but in reality it appears he was born on 1 September of the same year.

Bene was born at home by a midwife.

With a tomb already ready for him in Otranto, but with the firm intention of celebrating his own funeral alive, Carmelo Bene was a man who wrote his own destiny.

It was perhaps scrolling through the Piarist and Jesuit liturgies and rituals of his life whilst awaiting his stage debut that Carmelo Bene developed his revolutionary approach to theatre, an approach based on ‘suspension of the tragic’ and a refusal to be part of history.

Like Pinocchio, Carmelo Bene refused to grow up, lost his way and eventually freed himself of all (even personal) constraints. Having abandoned the Baroque architecture of Lecce for Rome, he enrolled in both the University Faculty of Law and the Sharoff School of Acting before joining the Silvio D’Amico Academy of Dramatic Art. Yet, together with his (jealous) tape recorder, he had already commenced private experiments with the polyphony of his own voice. Carmelo Bene debuted on stage in Camus’ Caligula in 1959, a year which was also to prove formidable for film (Truffaut, Godard, Hiroshima mon amour, the French nouvelle vague, etc.).

After his debut in Caligula in 1959, Carmelo Bene partecipated in a whole series of legendary shows including the first ever concert-show dedicated to Majakovsky (with live music by Bussotti), Lo strano caso del Dottor Jekyll a del Signor Hyde. In 1961 he collaborated with the painter Venditelli on Gregorio: cabaret dall’800 (1961) and created another theatrical legend with Pinocchio. His Cristo 63, caused Teatro Laboratorio, the theatre in which Bene and his company performed, to close forever when John the Apostle urinated on the Ambassador of Argentina and his wife during the opening night.

By the end of the 1960s, Bene’s Divino Amore theatre was the only Italian underground Theatrical movement in existence and Carmelo bene had become a phenomenon of alternative theatre. Yet Divino Amore was a brief experience which lasted only 6 months. The time had come to move into film.

In 1966 Beat 72 was inaugurated with a second version of Our Lady of the Turks. After which followed Hamlet and Salvatore Giuliano and a trip to Morocco to shoot Pier paolo Pasolini’s Oedipus Rex. Il Rosa e il Nero “is still the most important life-performance in the history of theatre, not only for its incredible innovation but also for the autobiographical-aesthetical prophecy (life-performance) it contained, a hint of the future which perhaps exceeded everything which regarded me after that.” Following Pier Paolo Pasolini’s Morocco, in 1967 Carmelo Bene took over a semi-abandoned theatre in Vicolo del Divino Amore, Teatro Carmelo Bene, in which he organized the last workshops to be held before embarking on his film career and the great theatre of the 1970s and 1980s.

Having already staged Shakespeare (Hamlet), Marlowe (Edward II) and Wilde (Salomè), between 1966 and 1967 Carmelo Bene staged Faust, a new version of Pinocchio, Il Rosa e il Nero, Monk Lewis and Our Lady of the Turks with Lydia Mancinelli, while in 1968 he reworked the anonymous Elizabethan Arden of Feversham together with Siniscalchi.

With his films came great international success. Although his film career lasted just a few years (from 1967 to 1973), it included such dazzling films as Hermitage, Our lady of the Turks, Capricci, Don Giovanni, Salomè and One Hamlet Less. In the 1970s, he won a vast following and great success with Sem Benelli’s superb La cena delle beffe (1974), Shakespeare’s Rome and Juliet (1976), S.A.D.E. (1977) and Byron’s Manfred (1979).

Carmelo Bene spent the last twenty years of his life experimenting with the voice, pushing actors to overcome new never previously imaginable bounds and placing him at the forefront of the world’s contemporary arts scene. Although his directorship of the Theatre Biennal in 1968 resulted in failure, he nevertheless produced some memorable works: recitals of Majakovsky, Leopardi and Dino Campana’s Can.ti orfici. Another testimonial to his inexhaustible creativity was the Hamlet Suite staged in 1994 in which he embellished Laforgue’s text with his own original music, extraordinary effects and heart-rending lyricism. It was a definitive performance, a milestone in Italian theatre. In 1995 Carmelo Bene returned to limelight and the bookshops with the publication of his complete works by Bompiani, while in 2000 he published the poem “I mal de’ fiori”.

Carmelo Bene died in Rome in 2002, although he claimed he had never ever been there.