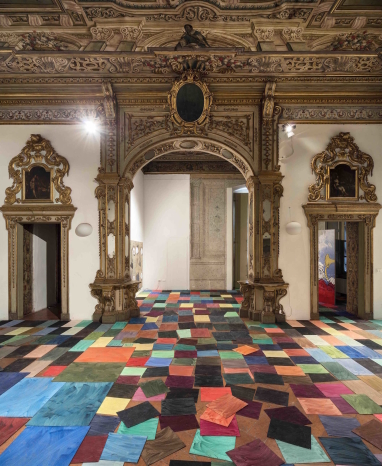 curated by Gigiotto Del Vecchio
A Palazzo, Brescia IT

Intrusion has never been contemplated. The door was already open and the history of the place revealed itself through signs, smells, evocations.

We got into the apartment at the first floor of the palace and decided to occupy a place that seemed to be empty…we didn’t feel an unpleasant atmosphere, it was more as a weak recall to another intervention and decoration process arrived from the apartment, a need that the place seemed to have since its very first conception. Beauty doesn’t invade but accompanies, in a journey through cultural placements, ideological choices, aesthetic guidelines.

Nobody’s in or maybe there’s somebody in the other room, behind a glass that seems a mirror to us, curious to see what’s going to happend behind it…

Charlie Billingham creates highly vibrant and fluid paintings and installations using language borrowed from art, interior design, printmaking and art history. In his painting practice, for instance, Billingham has been inspired by historical imagery dating back to the late 18th- and early 19th-century; Georgian and Regency etchings by James Gillray and George Cruikshank inspired one series of work. Billingham’s art often features minor characters and animals from such dated cartoons, portrayed in splashy color combinations. The images might also be cropped or enlarged, rendered either as wallpaper or reversible motifs on canvases, and they thus reveal an original and contemporary twist on past iconography.

Giulio Delvè (born 1984, IT) analyzes objects, architectures and elements in order to generate a reflection on their function and, consequently, what can result from an alteration of such function. His works often originate from found objects, which he dismantles, re-creates or re-arrange. These latter are often linked to a series of rituals, which have the role of defining and identifying a group of people. The narratives developed by a group as a communal output are a major part of Delvè’s research, together with their shared symbols, collectively experienced rites and the allusive, metaphorical and symbolical relation between the object and its history. Among Delvè’s most recent exhibitions there are: Wholetrain, curated by Daniela Bigi at Fondazione per l’Arte, Rome, IT; IV Edition Moroso Concept for Contemporary Art, curated by Andrea Bruciati at Villa Manin in Passariano, IT; Per_Forming a collection #3, curated by Alessandro Rabottini and Eugenio Viola, MADRE Museum, Naples, IT; Andata e ricordo. Souvenir du voyage, MART, Rovereto, IT.

Douglas Gordon (b. Glasgow, 1966) is an artist whose time and perception-based practice spaces thoroughly to include both issues of collective memory and society’s consolidated familiarity with commodities of life. Objects of discussion hence embed the moving image or mechanisms of the everyday existence, which he elaborates through a whole range of diverse outputs, from video narration and film, to sound productions, manipulated photographic prints and texts installations. One of his most renowned works, 24 Hour Psycho (1993), is an excellent example of Gordon’s methodology of alteration, monumentalization and alienation of the viewers’ gaze and understanding of the moving image, and media in general, obtained throughout the manipulation and superimposition of actual video material – which also turns into a reframing of memories themselves. The work consists in a slowed down version of Hitchcock’s film, lasting 24 hours, to be projected onto a translucent screen. The work is meant to erase away from the viewers all the pre- existing tension and suspence of the original version. Over the last decades, the artist has continued his work of distorting perceptions, up to his latest abstractions of digital images which he pixels to the point of creating a visual illusion for the spectator (Presque Rien, 2015). Gordon has shown his work internationally and had numerous solo exhibitions and retrospectives such as Black Spot at the Tate Liverpool (2000); Douglas Gordon at MOCA, Los Angeles (2001); Timeline at the MoMA, New York (2006); Between Darkness and Light: Works 1989–2007 at Kunstmuseum Wolfsburg, Germany (2007); Blood, Sweat, Tears at DOX Centre for Contemporary Art, Prague (2009) and Pretty much every film and video work from about 1992 until now at Musée d’Art Modern, Paris (2014). In 2005, he was the curator of The Vanity of Allegory at the former Deutsche Guggenheim in Berlin and released the film Zidane: A 21st Century Portrait at the 2006 Cannes Film Festival. His film works have also been invited to Toronto International Film Festival (TIFF), Venice Film Festival, and Edinburgh International Film Festival. Among others, Gordon was also the recipient of Turner Prize (1996), Venice Biennal’s Premio 2000 (1997), the Hugo Boss Prize awarded by the Solomon R. Guggenheim Museum (1998) and Käthe Kollwitz Prize (2012). Gordon lives and works in Berlin.

Natalie Häusler’s installations explore means to cross textual and visual information. Her writing practice is intertwined with her artistic practice as the poems she writes form the starting point for most of her installations. The works on display are developed through the use of a combination of painting, scanner, copy machine, altered ready-made objects, organic material, photography and printing processes. Questions regarding the roles and assigned attributes of producer and consumer arise along with a dis- placement of borders between sensual and intellectual experience, of information and carrier. Born 1983 in Munich, she currently lives and works in Berlin. She received her MFA in 2011 from Bard College/ Milton Avery Graduate School of the Arts, New York and a Diploma with honors and Meisterschüler degree from Braunschweig University of Art. Recent exhibitions include: Corals, Supportico Lopez, Berlin; The Verdant, Hacienda, Zürich; El Polvo se posará, Combo, Córdoba; La Mer Insomniaque, Laura Bartlett, London. Her work has been shown at Raven Row, London, Kunstverein Nürnberg, Kunsthalle Ravensburg, Nurture Art Foundation, New York, Soi Fischer Projects, Vancouver, Chelsea Art Museum, New York, Galerie Warhus Rittershaus, Cologne and ZKU – Zentrum für Kunst ind Urbanistik, Berlin. She received grants from BAU Institute, NY and the Hans und Charlotte Krull Stiftung, Berlin, the Cité des Artes, Paris and a one-year DAAD scholarship for New York. She is a co-founder of the poetry press American Books (Natalie Häusler/ Ed Steck/ Brett Price).

Over her thirty-five years long practice, Christina Mackie (b. England, 1956) has delivered what appears to be more of a continuous series of works in evolution – rather than severe phases of production. This is probably in reason of Mackie’s never-ending attraction to colours’s properties, perceptive reactions and material capacities, naturally acting as trait d’union for her consistent body of work and ample use of diverse media. Her practice touches on the capacities of materials such as crystals, clay, garnet sand and pigment blocks against forces of compression, gravity, technology or on the power of sheer empirical observation, exploring issues of sculptural solidity against painterly fluidity. Consequently, one can expect to find 12- metre-high, colour-dipped silk nets ethereally suspended above circular containers of semi-crystalised dye, as well as free-standing sculptures assembled in Mackie’s customary montage fashion, or chunks of raw glass, highlighting the artist’s interest in natural and man-made materials. Christina Mackie’s sculptural installations weave an intricate web of associations between their diverse physical components. Her installations also encompass 3D objects, digitally generated, watercolours, ceramics, photographs and found tools. Holding an inherent respect for her materials and an intuitive understanding of the way things work, Mackie’s creative processes are often directed by what something can be made to do. Both personal and complex, her works are imbued with her own experience of the world and her private thought processes. Raised in Canada, Mackie lives and works in London since the 1970s. Her most recent solo exhibition is a project for the Tate Britain Commission 2015, where she showcases a three-part installation centred on her ongoing fascination for pigments and colour. Moreover, in the last years she has shown at Praxes, Berlin (Drop, And Bird, Frog And); The Renaissance Society, Chicago (Colour Drop, 2014), Kunsthal Charlottenborg, Copenhagen, and Chisenhale Gallery, London (Painting the Weights, 2014); Supportico Lopez, Berlin (The Judges, 2010); Herald Street, London (This That and The Other, 2007) and Tate Britain (Art Now Sculpture Court, 2007). Mackie won the Becks Futures Art Prize in 2005. She was also recipient of the Paul Hamlyn Award – a three year production grant which she was awarded in 2010; in the same year she received the Arts Council England 2010 Oxford/Melbourne Fellowship. Mackie won the Contemporary Art Society’s Commission to Collect annual award in 2012, exhibiting the resulting work The Judges III at Nottingham Castle Museum & Art Gallery in 2013. Among others, her works are present in both the Tate and the Arts Council collections. The Contemporary Art Society will support a monograph of her work, scheduled to be published this year.

Pentti Monkkonen (b. USA, 1975) is a Los Angeles-based artist. His artworks span from collections of NASA artifacts to relief sculptures replicating the side views of trucks. This latter series of paintings, titled Box Trucks, parodies the Californian food suppliers Worldwide Produce, enhancing a painterly critique of the current era of food commercialization, which is rendered with anthropomorphic depictions of spray-painted vegetables on the vehicles. Other trucks from Monkkonen’s work display an enigmatic branding, entirely or partially covered with graffiti tags, occasionally, humorously hinting at the controversial characters inhabiting the contemporary art scene. Such fascination for trucks, and freeways, can be traced back to Monkkonen’s 1997 performance Herfhaf-Maahaf Ceremony, where a group of people acted out an ode to the freeway inspired by African rituals, parading in a procession which culminated in the installation of a Control Tower at the intersection of two roads. After this, Monkkonen realized a skull car prototype and a duo of Swan and Duck mini-motorbikes. His works have been exhibited all over the United States and in Europe, including Jonathan Viner Gallery (London), Hacienda (Zurich), High Art (Paris), Tanya Leighton (Berlin), and A Palazzo (Brescia, Italy in collaboration with Supportico Lopez, Berlin – forthcoming).

Niels Trannois’s artistic research focuses on exploring the medium of painting, and its meaning, through intuitive or premeditated creative acts, which he bases on the interaction of different materials and techniques. His practice being deeply rooted in the process, Niels Trannois develops his pictorial works through a series of steps, inscribing, transferring, and layering images onto multiple surfaces. Trannois likes to play with the unpredictability of the painterly practice, and he does so by applying layers of linseed oil to – and through – prints or photocopies which he has lying on canvas-covered panels. The oil application provokes a slow transfer of inks from the paper to the canvas and the wood, creating extraordinary, surreal patterns. That’s probably the reason why Trannois’s paintings have been said to have the potential of being understood as fragments of a fictional scenario, as parts of a landscape which could be enacted only if reality were to be torn apart, letting an hidden side of the world to emerge. Trannois (born 1976, France) lives and works in Berlin. Recent solo exhibitions include: S (oú s’insinue une impression sourde), Supportico Lopez, Berlin; B (hands in a Chinese cookie jar), Galerie Chez Valentin, Paris. He has participated in various group shows on an international level, including participations within Contemporary Art, New York, US and Villa du Parc – Centre d’Art Contemporain, Annemasse, FR.