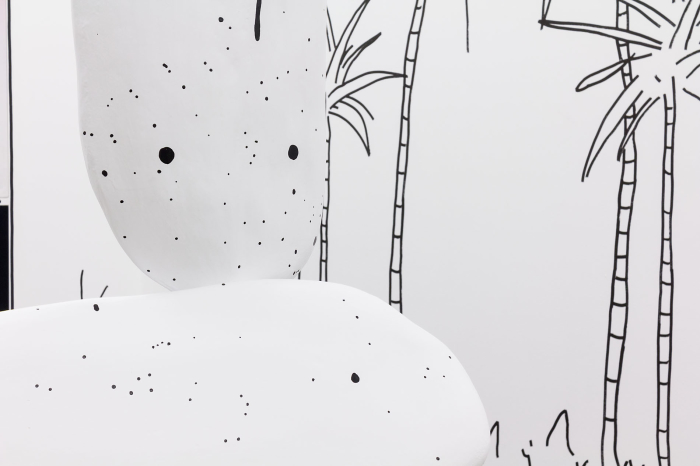 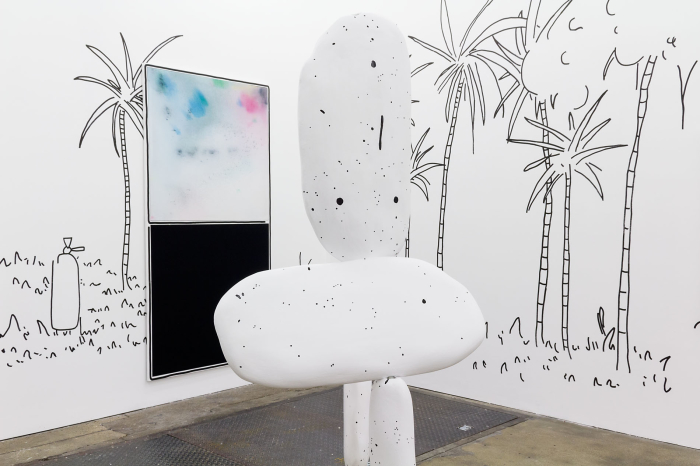 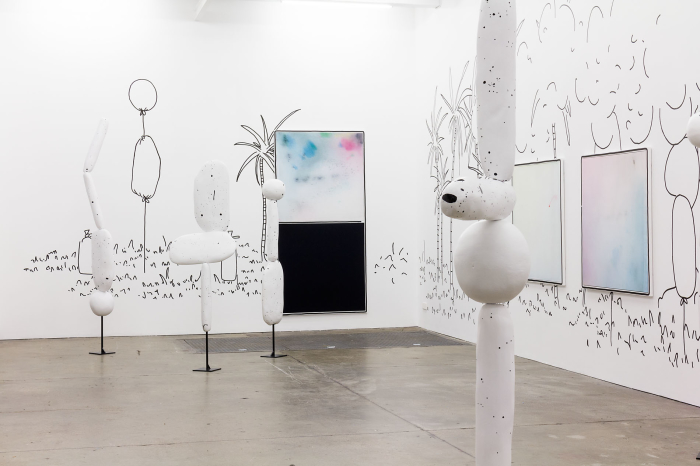 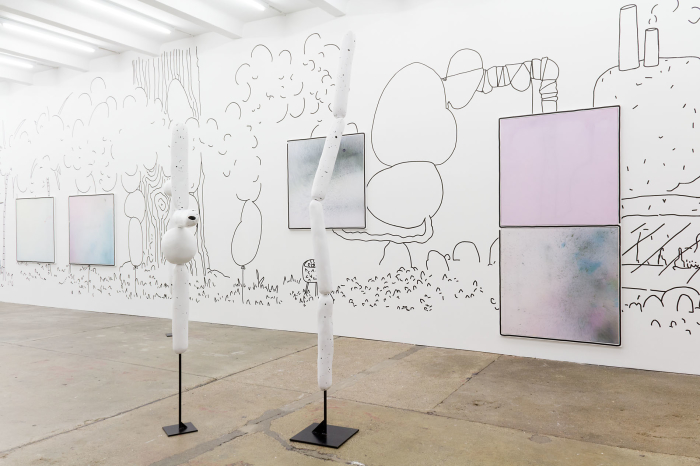 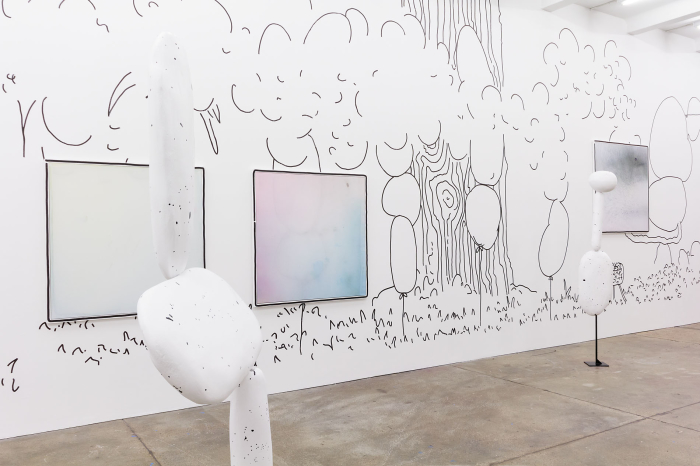 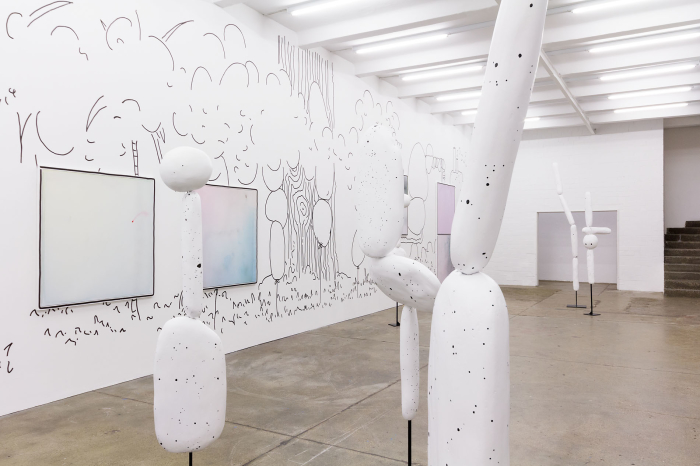 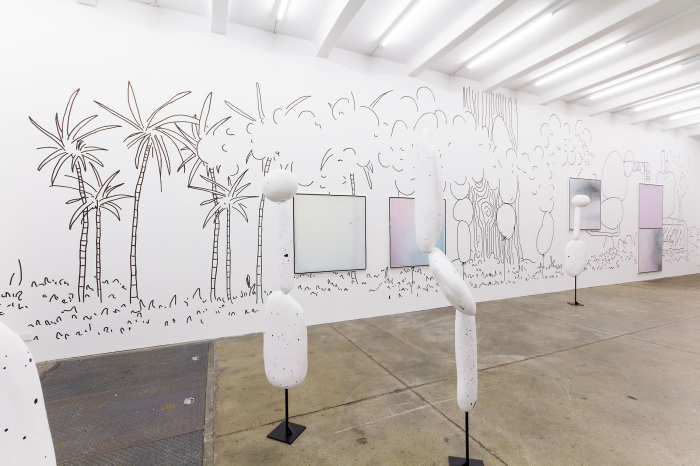 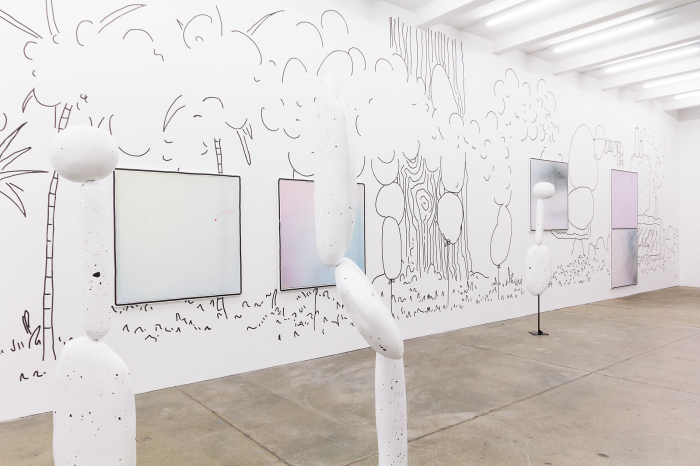 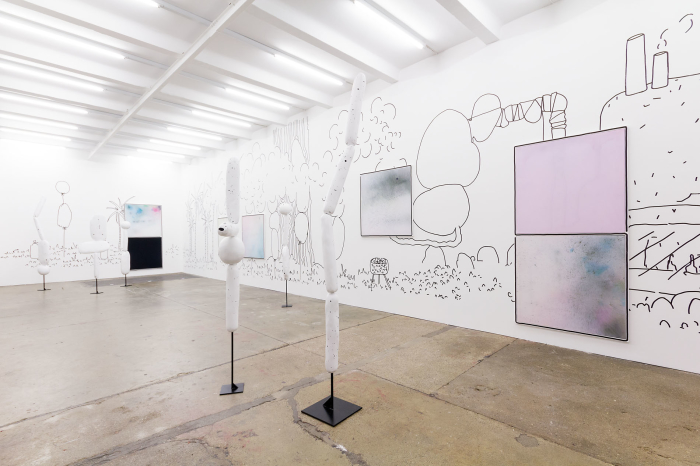 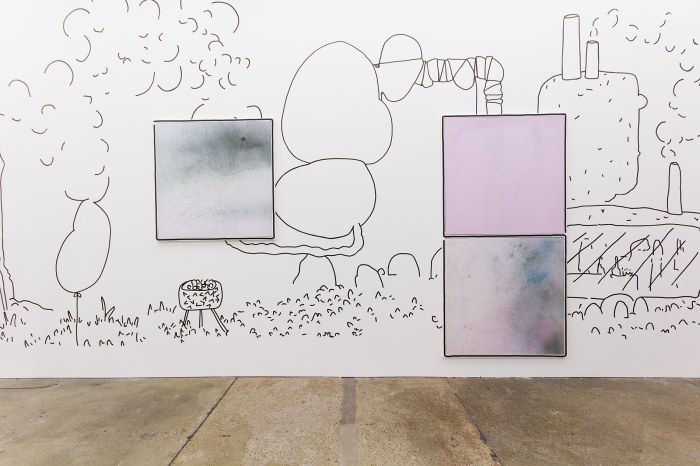 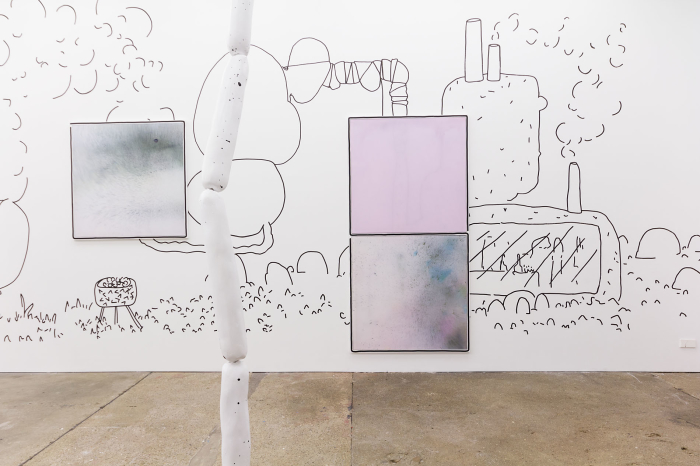 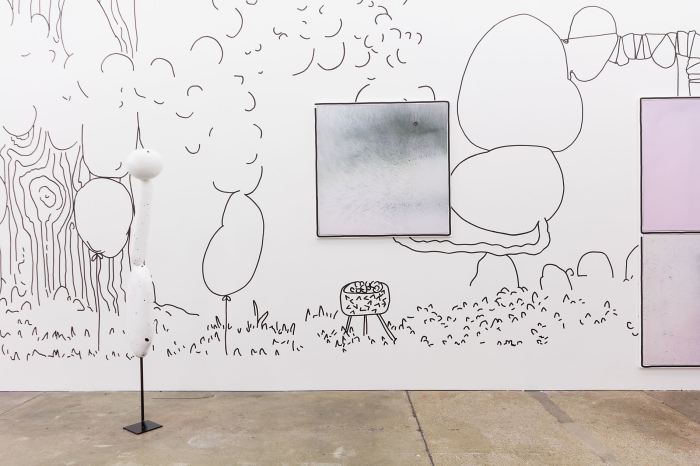 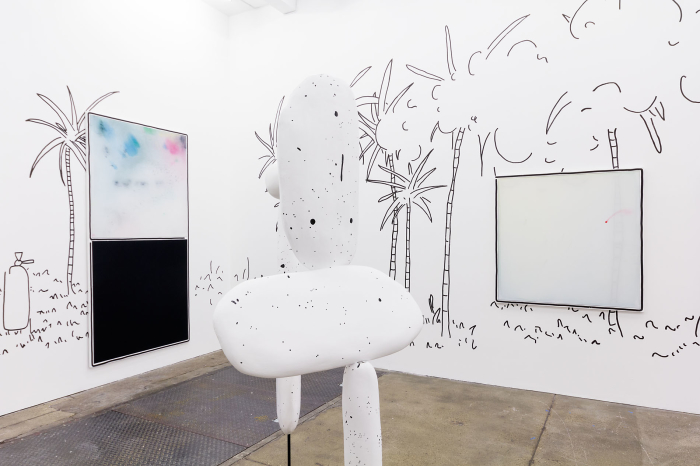 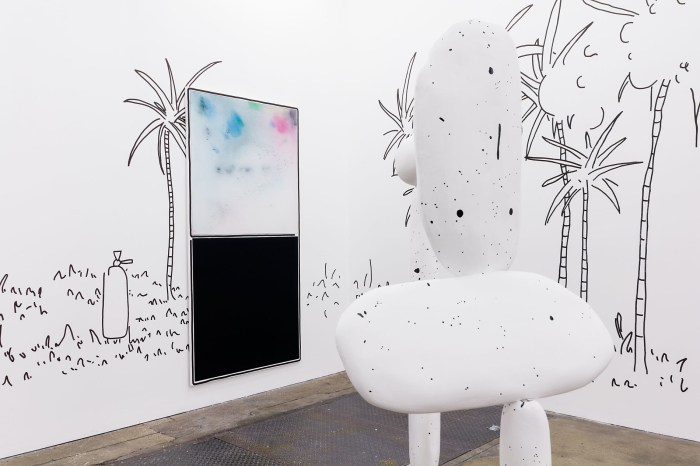 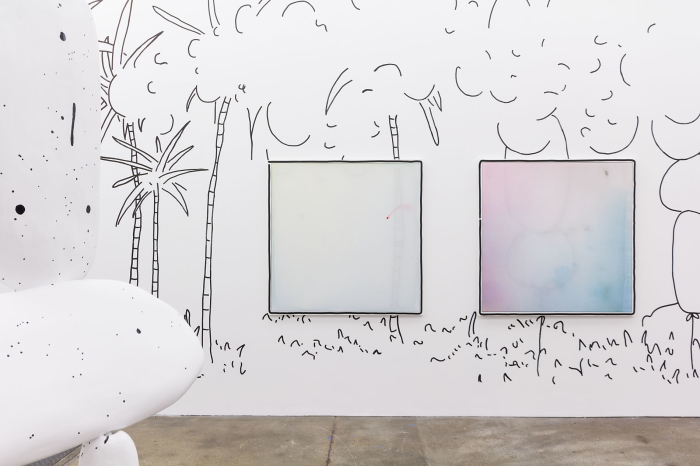 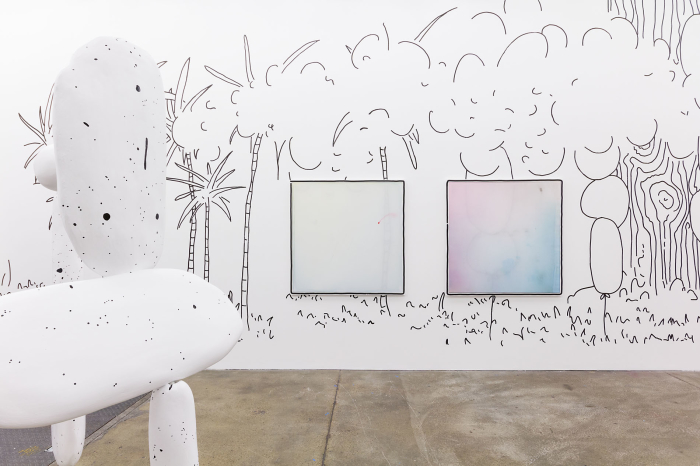 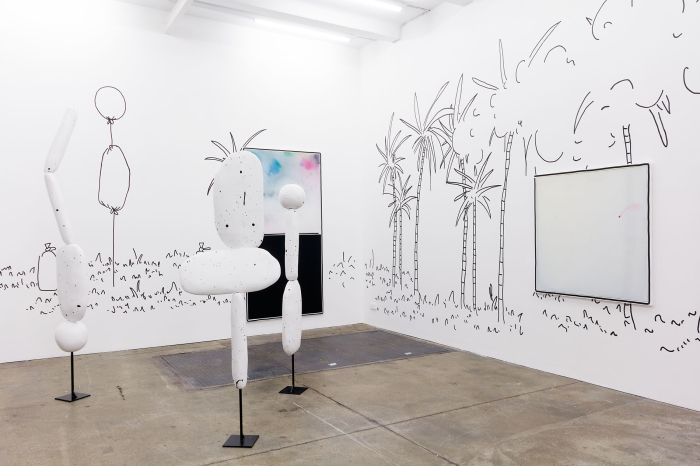 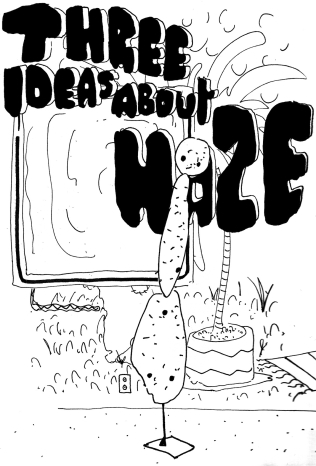 Zin Taylor’s work revisits the process, construction and inscription of form through specific cultural histories. With an expansive and philosophical approach to art making, Taylor employs familiar visual cues to probe the malleable and mysterious divisions between concept and material. He asks how objects might translate thought and how ideas can find tangible articulation in form, engaging a process where thoughts about a subject are translated into forms about a subject, where abstraction and phenomenology participate as tools in a narrative development of form.

Taylor writes, “I’ve been looking at how ideologies, in the past and present, produce and adopt forms in order to distribute themselves. Haze, as it floats in the air, collecting into discursive units, is one explanation as to how this can happen; it’s how thoughts can adopt an alternative form in order to communicate with a public.”

The exhibition Three Ideas About Haze presents a dialogue of new works addressing the articulation of haze as an unformed narrative material. These new works look at the middle zone where thoughts turn into tools in an effort to translate interior thinking into an exterior visual form. Employing fabric, sculpture and drawing, these three ideas distribute amongst the space within a propositional scenario. A Stripe of Thought Navigating a Void of Haze describes a number of sculptural screens comprised of one or units of stretched cloth. The cotton fabric has been dyed using an elaborate process involving the use of a wooden plate matrix, indexed with color, with the pigment brought up through the cloth with the addition of tinted layers of mist. These acidic compositions describe a series of void spaces, borrowing from the language of hallucinogenic histories, that are demarcated with the addition of a single black stripe that outlines a space for the thought to exist within. These thin sculptural spaces are arranged upon a thirty-two meter wall drawing, Thoughts of a Dot as it Traverses a Space (Lost Coast Haze Retreat), describing the presence of haze within an organic scenario of rocks, trees, palms, balloons, a BBQ and a club. An illustrated selection of forms that feed on, collect, produce and redistribute this narrative material amongst themselves, communicated by a thin black line as it travels the surface of the gallery wall. Situated on the floor of the gallery is an arrangement of six sculptures, Units Enunciating Through Posed Composition (Body Haze). Composed of units derived from that of a human form, each employs a language of gesture using only themselves as material. If the physical analog of narrative is haze, these are forms that have collected this generative substance within each limb, torso, and head. Their surfaces recording the emergence of this material into moles and birthmarks, a cosmology of dots and spots composing the surface narrative of each unit, their gestured articulation relating to the verbal pronouncement of a thought.